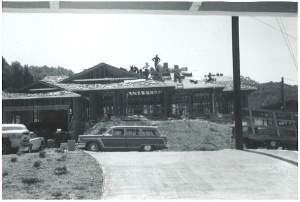 The dry cleaning dangling from my right hand grazed the glass front door of my father’s midtown house-turned-duplex. I turned the key then pushed the door open with my left shoulder. Despite the solstice not being for another two weeks, Sacramento’s summer waited for me in my father’s lower unit. His place was silent, save for the pre-summer wind whistling through the window crevices. My dad was away for the afternoon at a recently deceased colleague’s memorial.

As I walked into the dining room I noticed opened moving boxes on the table. Strewn out beside them were heaps of photographs. Some small, some large. Some were even panoramic. They were a mixture of color and black and white prints. I draped my dry cleaning over a chair. The plastic coating over it purred softly as it came to rest. I sat down, looking over the scattered piles of captured memories.

At first it appeared my father was preparing for my best friend from childhood’s wedding. That was in fact why I was in town for the weekend, Frances’s wedding. On the top of the many piles of pictures was one of me, Frances, and Mitch, her high school sweetheart, and now her husband to be. In the 8×8 color print we stood together outside my childhood suburban home, dressed for junior prom. Our legs were kicked up to the right in unison. We were posed in the can-can dance position. Smiles were spread across our faces. Behind my own was a nervousness more complicated than the picture could possibly show.

I went with a beautiful girl who was a year ahead of me in school. She was my co-anchor on the daily morning announcements. Her intensely curly, blonde highlighted hair, sparkling green eyes, and bubbly personality appealed to droves of other boys. I asked her because I enjoyed being around her infectious positive energy and it seemed the easiest “yes” to get from anyone. She was a friend beyond anything else. Our prom together was enjoyable, but I kept it even tamer than a G rating. I didn’t even to attempt to kiss her at the end of the night. Part of that was a fear of rejection and the other part being a stronger interest in the boys. But at that point, I hadn’t given much thought to dating guys. Asking them to the prom seemed out of the question.

I began flipping through the black and white pictures eventually coming to one of my grandmother in her wedding dress. Her posture was better than I had ever known. Perhaps she was past 5 foot at her wedding. I’ve known her only in her below 5 foot days. She’s seemingly shrunk in height, but not personality, each passing year.

Noticing many pictures of my deceased grandfather, I remembered my father had organized a memorial hike for him in a few weeks time. Maybe this was why he took all the pictures out. To find one to bring to the hike. I stumbled across a picture of my grandfather at my Uncle Steve’s bar mitzvah. He stared stoically into the camera. A tallit was draped over his shoulders and a yamaka rested on his head. His facial expression dictated: “I really don’t know why you have to take this picture, but if you must, go ahead, I’ll play along.” It’s the sort of attitude you want subjects to have in a photograph. A sort of truth comes out when people are just able to be themselves despite the camera’s gaze. So often moments captured on film fail to give a true depiction of a person or time because people adjust themselves to what they think the camera wants: a smile, a weird face, a respectable posture. Once the camera’s off them, they return to their natural state.

Dogs, however, are naturals when it comes to being photographed. They don’t know any better. I flipped through some pictures of Buddy, our old golden retriever. In one photo, he lay in the grass, soaking in the sun. However, in many of the pictures he refuses to face the camera, not knowing what my dad wanted from him. So maybe dogs are not always the most photogenic creatures, but they still know how to properly ignore the camera.

I moved back over to the black and white pictures. I then came across a photograph I had wondered if was in existence: my grandparents’ house as it was being built by my grandfather. I gripped the picture and sat back in my chair, staring at the wooden skeleton. The design was unmistakeable: steep sloping driveway, pointed roof to the left, and a long, ranch style frame to the right. In the distance were the tree laden hills of Marin County. In the 4×4 print the carpenters atop the tiny forest of wooden beams were barely visible.

Setting the picture back down on the table, tears started to form. It was my father’s home. It was my grandfather, the renaissance man, doing the work he loved and was revered for. It was the home I used for months before finding a place to live in San Francisco. It was the home my grandmother had to rent out because she couldn’t live there any longer without full time care. Time stood still as I continued to stare at the picture. I’d known this house in its finished form all my life. It’s the only way I knew it. Which left me taking it for granted, believing it eternally existed. The memory captured in the picture had become immortal. Yet, it was also a stinging reminder that all things in life, and life itself, have a beginning and end.

My dad walked in just as I was moving onto more current photos. “How was the memorial?” I asked him. “Hard,” he responded. “I knew Carol for a very long time. She was a really great person. Wish I had known her better.” He went to the kitchen. His keys jingled as he set them down on the counter.

“Are all these pictures out because you’re picking one to give Frances and Mitch tonight at the wedding, or for grandpa’s memorial hike?” My dad walked back into the dining room with a glass of pineapple juice. “Actually, it’s for your Aunt Shirley’s memorial.” I felt ashamed to have forgotten the most recent in the family’s long list of passings. “Oh, right,” I said somberly. “So you went to Jeremy’s graduation last week.” I reminded him of his nephew’s graduation. “And a memorial earlier and a wedding later today. How does it feel to be involved in such different types of ceremonies?”

My dad gave out a long sigh as he leaned on a chair. “They’re all celebrations of life really. Youthful achievements, unions, and honoring the entire arc of a person’s life. They just celebrate different blocks of life.” My dad shrugged, not knowing what else to say. I nodded in understanding, agreement, and satisfaction over the content and brevity of his answer. He took a sip from his glass and looked thoughtfully out the window at the trees blowing in the wind. With that I peeled back the protective plastic sheet covering my dry cleaning and began to get ready for Frances and Mitch’s wedding.