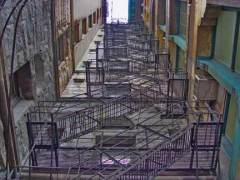 Ricardo, Luna’s father, lead me through a series of dimly lit halls. The maze leading to his family’s unit, inside their Tenderloin District apartment building, was lined with eroding white walls and stained 70s style carpeting. We turned a corner and went up a set of stairs. A window followed us up a floor.

The sun’s light trickled in through the thin gap between the window and the brick wall outside of it. I peered outside as I climbed, noticing the dark rusted fire escape that was wedged between the two buildings.

Finally we reached apartment 14. Luna stood bashfully in the front doorway. Her brown hair was done in pigtails. Each of her two braids were held together by thick, blue hairbands made from elastic fabric. I crouched down so that my eyes were even level with hers.

“Hi Luna. You remember me?” She looked up at her father, then nervously smiled and nodded at me. “Max.” I reintroduced myself, putting out my hand. She shook it. Ricardo motioned invitingly for me to step into the apartment. He said something to Luna in Spanish which made her disappear momentarily into the kitchen.

It was a one room apartment, with a single window that gave the same restricted view as the one in the stairwell. The rug was dark green, making it feel ever darker in the room than in the apartment building’s hallway. I waited for Luna, eyeing two bunk buds that took up half the apartment.

Luna returned with a bulky set of flashcards, held together by a flimsy rubber band. She handed them to me. The first card read “laugh”. I turned to Ricardo. “This is great! Esta fantastico,” I said ecstatically. I flipped through the flashcards as Luna and her father took me two steps further into the apartment, into the kitchen.

Luna sat across from me at a circular, wooden table pushed against the wall, as to keep maneuvering room for the cooking area. I zipped open my backpack, pulling out some of the materials Ms. C. had given me to use. Ricardo set up a chair in the doorway between the kitchen and the main room. He sat and watched attentively as I pulled a cluster of first grade level books out of a plastic ziplock bag. I shared the front cover and title of each book with Luna. Once all the books were spread across the table, I asked her to pick one. “Mean Bean,” she said, pointing to the book with the most animated and colorful characters on any of the covers.

It was comforting to have my mother’s thirty years experience as an elementary school and special education teacher to lean on. Using the strategy she had recommended, I stopped after each page and asked Luna about the pictures she saw. “What are those?” Luna pointed at one of the pictures. “They’re his eyebrows,” I told her as I rubbed my own dark, bushy brows. “Oh,” she said. She then rubbed her own brows. “Sejas,” she said.

Periodically Ricardo would comment in Spanish, using an English word here and there, repeating some of what I was teaching his daughter. “Why do you think Mean Bean was so mean?” I asked Luna at the end of the story. “Because he wasn’t happy,” she stuttered.

Ten minutes were left in our hour long tutoring session. I pulled out a couple games from my backpack: a deck of cards, bingo, dice, and a set of multicolored, plastic building blocks. I let Luna choose which game she wanted to play. She placed a hand on the blocks. “This,” she said. “Ok,” I responded. “I’ve got a game we can play with those.” I grabbed the two dice. “We’ll take turns rolling the dice. However much is on the dice, is how many blocks we get to use that turn.” With that, I rolled my die. It rotated until it rested on a three. I took three blocks, two pink and one blue, and connected them in a straight line. “You get how to play?” I checked in. Luna nodded.

As the game progressed, the structure I made with my blocks became more and more avant guarde. Luna’s closed in on a recognizable figure. “That looks like a person jumping,” I commented. Luna pointed back to the cover of “Mean Bean”. “It’s him,” she said.

At twelve noon we cleaned up the table occupied by blocks and books. Ricardo said something to Luna in Spanish again as I was repacking my backpack. Luna then spoke up. “I have books in English.” She led me back into the main room and showed me a pile of kids books in English. “Will you pick a book out to read to me for next time?” She nodded and smiled more confidently this time. I turned to her father and communicated in the best Spanish I could call upon. “El mismo tiempo en jueves es beuno?” Ricardo nodded and responded, “Si.”

I walked back through the dark maze. Outside the brick apartment building pigeons nibbled at cornbread that was stuffed in a bent aluminum tray in the gutter. I took a deep breath of fresh air, intensifying and embalming the high I felt.