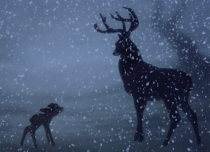 Light poured onto a cluster of worn desks. They were all pushed just below the classroom’s large set of back windows. Mr. Allen leaned against a bookshelf beside the cluster. His students were divided evenly into two groups. One group to the left of the cleared room, and the other to the right. He flicked his eyes to the left group, then the right, then called out, “Oh deer!”

Both groups instantly reacted to his signal. Annie, one of his students in the left group, shot her hands up into a triangle above her head. Some kids did the same as Annie, while others mimed two other gestures: cupped hands at their mouths or fingers inside their mouths. Once Mr. Allen was satisfied with what he saw, he shouted, “Find your resource!” The mad rush began. The group on the left darted for the stationary group on the right.

Annie ran across the gap in the classroom. She weaved through the stampeding herd of her classmates, deadset on a peer who held his hands in a triangle above his head like she did. She reached him safely. Annie had survived this round.

“Ok,” Mr. Allen broke in. “The deer who survived and found their needed resource, whether it be water, shelter, or food, go back to the left side. Resources, if you were used, go to the left side, you’re a deer now. You’re the procreation. Deer who didn’t get the resource you needed, stay to the right. You’ve decomposed and are part of the earth. You’re a resource now. Resources who were unused, stay to the right. You’re still a resource.” The class shuffled after absorbing Mr. Allen’s directions. There were more deer now than resources.

It was my last day volunteering in Mr. Allen’s class, at least for this school year. They were playing a game called “Oh Deer”, a lesson on the fluctuation of animal population over time. Mr. Allen wore a broad grin on his face that grew as the game continued.

I looked beyond my teaching mentor at the view of the Golden Gate. The bridge’s two peaks were hidden by the morning fog. It was an unreal sight I’d grown accustomed to seeing every volunteer day.

“Adjusting to your style of teaching took some time,” I told him while the deer began to overpopulate his classroom. “I wasn’t quite sure how to best aid you or the kids until the last couple weeks.” Mr. Allen looked on intrigued. “Your lessons are so engaging and ongoing. You’re either engaged with them as a whole or you have them engaged with each other. It’s so different than most of the teachers I’ve volunteered with. It’s refreshing and I’m better off for experiencing it. I’m excited to come back next year.”

Mr. Allen smiled back at me. “Glad to have you back.” Then he asked, “So, should I introduce the effects of the industrial revolution and pollute the water that exterminates the deer and resources?” His grin grew maniacal. “I guess this game could be applied to humans,” he added. “We’re due for another die off soon. But it’s the end of the school year. Maybe we’ll keep it a little less morbid.”

At this point Mr. Allen was playing god, dictating how many of each resource there could be. The large population of deer began to siphon off. Annie, thus far, remained a deer.

“It must be reassuring that you’ll be teaching 4th graders here again,” I said. Mr. Allen nodded and then responded, “Yeah man. If we didn’t wind up meeting our school-wide fundraising goal, I would’ve been close to the top of the chopping block, since I’ve only been here this year. We just made it, so we get to keep the status quo for next year, at least.”

The deer population slowly dwindled down to one. Annie was now the only deer left standing. She looked across the room at all her classmates. “Oh deer!” Mr. Allen said one last time.