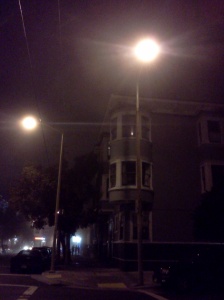 Fog swirled around the lit lampposts at Cole and Waller as I waited for the 43. It was 11:00pm and nearing the end of a long day that began with a call from my mother at 9:00am, letting me know she was in Berkeley and 25 minutes from reaching my new home.

I invited her two weeks prior to come see my studio. I’d been describing it to her in great detail in the months leading up to my lease and was excited for her to finally see it. A shy sunlight peaking through the small window over my bed nudged me out of my post slumber daze and my bladder soon reminded me that I drank a tall glass of water at 2:30am before drifting off. Without a choice in the matter, I pushed the heavy covers off my body and headed toward my tribal-themed bathroom. I stared at the wooden mask above my toilet. She always gives me privacy; her eyes are always shut. Now that I was in the bathroom, out of convenience I turned on the shower and stepped into my day.

When I first left Los Angeles four months ago I stopped in Sacramento for a week. Through divine intervention, or fitting coincidence (whichever best suits your belief system), my mother’s aura reader, Anne, was in town during my stay. It felt like a natural fit to go get my aura read: I had just ended one era of my life and was about to begin another. Why not gain a little insight, I thought to myself.

Click. The picture was being taken. A large black box was perched in front of me atop a wooden tripod. Decorated on its sides were polaroid pictures of what I assumed must be others who had their auras read. Cold metal plates the size and shape of my fingers were wired to the box. I kept my fingers on them, palms down, while looking straight into the camera as instructed. Fifteen seconds passed. Anne pulled out the polaroid, ripped off the white protective covering and began shake it, encouraging the picture to develop. After my image revealed itself she sat down next to me and began her reading. 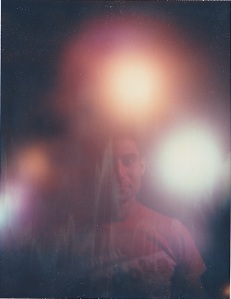 All the things that came out in my aura made perfect sense, many of them related to transformation. However, the one element that stood out was anger. The area above my shoulder on the left side of the picture came up dark red. Anne described this as held, pent up, and ignored anger. She told me I needed to let it flow freely in order to release it or else the anger would explode at an inconvenient moment or, even more likely and even more devastatingly, its festering would cause physical harm to my body (in the same way that stress makes our bodies susceptible to illness).

Anger is a natural emotion and is an evolutionary tool used for survival. It surfaces when we profoundly dislike the events or results presented before us. Anger clarifies what we consider to be our obstacles and, inversely, what are our true desires. Instead of embracing my anger and placing it onto an activity or letting it blow over in the moment, I always try to mute it. Recently, my pent up anger manifests itself when small unexpected things occur; someone cuts me off on the road, a machine at the gym acts up, the internet connection fails, a dog startles me with a bark while on a jog. My reactions are like little explosions, and are hardly necessary under the circumstances. I curse in frustration, knock something over, or spit angrily in the direction of what causes my rage.

Ever since I made the conscious decision that I wanted to improve my romantic life, I’ve held this anger. Over a decade’s time I’ve built tall, thick walls around my deeper self. They were originally intended to make me emotionally invulnerable, but they began to hold me captive. We’re social animals; we need trust and intimacy with others, and this is most potently found in a romance. The walls I’d built left me invulnerable to love. The anger that bubbles inside me is a reaction to a desire, yet inability, to break down those walls to let people in. 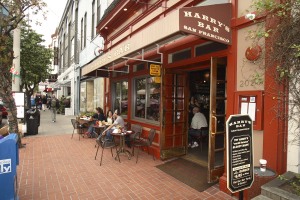 At the end of my mother’s visit to my new home we ate at Harry’s Bar on Fillmore. Over dinner we talked about our dating lives. It was the first time we had this conversation since her and my dad separated three years ago. There had been no men she dated since the separation. She asked me when was the appropriate time to tell me she was dating someone: 1,2,3, more dates? I told her the right moment was when she knew she wanted to continue dating a guy, and when she knew he felt the same way about her. Before moving to San Francisco the last real date I’d been on was back in sophomore year of college, five years ago. Since the move, I’ve been on four dates, all par or subpar, and all lead nowhere. It made me happy to know I could have this conversation so easily with my mother. It was a sign I’d established an identity as an adult with my mother. But more even more so, it was a reminder that the walls I’d put up were not so dense anymore. 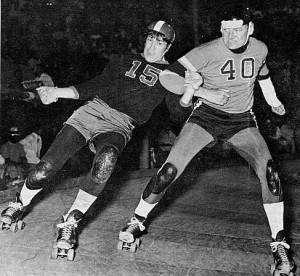 Later that night I went to a roller derby match with some new friends. The Bay City Bombers were playing the New York City Chiefs. Early on it became clear the league was closer to WWF than professional roller derby. Even though I knew these were only players loosely keeping to a script, I couldn’t help but wonder if they held true rage inside the barriers of their wooden track. The Chiefs played the bully. They taunted the Bombers and their fans after scoring or knocking down their opponents on a “dirty” play. Was there rage inside those walls? There was definitely rage outside of them. Close to 200 fans yelled, screamed, cheered and booed during the entire match. One of the friends I went with shared in the spirit of the crowd. He suspended his disbelief for two hours and completely immersed himself in the drama of the match, with attention especially paid toward the antagonistic New York Chiefs. Could this help anger flow? I tried as best I could to see for myself, but only felt a small taste of it.

The Bombers won in dramatic fashion, scoring a set of game winning points in the closing seconds. Our group exited Kezar Pavilion into the night. The fog had rolled in even thicker since the match began. I pulled out my smartphone from my pocket, checking which bus was best to take home. It told me the 43 at Cole and Waller which would arrive at 11:10p.m. Rounds of hugs were given and soon my new friends disappeared behind me into the fog as I made my way to the 43’s stop. While waiting I snapped a photo of the lamppost in the fog. Photos tend to look different than what you see, especially when they’re taken in the dark and in the fog. Lights come up much brighter and more saturated than they actually are, and fog goes underrepresented. I took a mental snapshot of myself in this quiet, still moment, after this day, and after all the events that happened leading up to my move to San Francisco. The walls I’d built were lower and thinner than they had ever been, and they were continuing to be brought down. All my rage was like the fog, underrepresented in my mental picture, but still I knew it was there. And, unlike the fog, I knew it provided a clearer view to a better life.

5 thoughts on “All My Rage In These Walls”